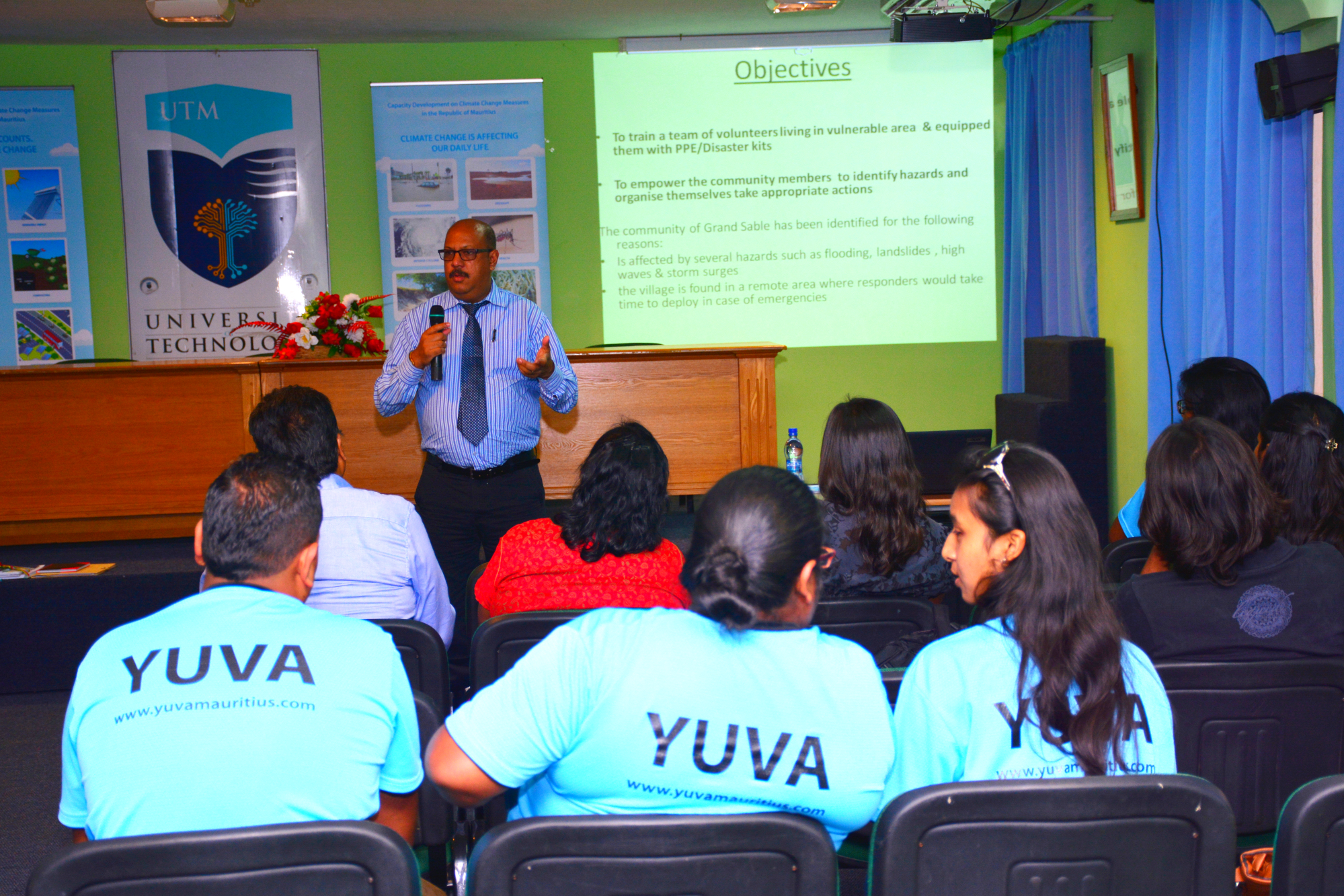 In line with its Goal 8: Climate Change, YUVA District Riviere Du Rempart, held a half day Seminar at the University of Technology, Mauritius, to mark the International Mother Earth Day 2016, on Thursday, 21 April.

“According to the World Risk Report 2014, Mauritius is ranked 14th among countries with the highest disaster risk, where the Flash Flood of 30 March, 2013 proves the fact that our island is not adapting to the effects of global Climate Change.” – President of YUVA District Riviere Du Rempart, Soveeta Chengappa Naidu

The seminar started with a portrait of the current situation of Climate Change and its impact on the island of Mauritius, followed by resource persons from the Ministry of Environment, Sustainable Development-Climate Change division, the National Disaster Risk Reduction Management Center and academic staffs from the University of Technology, Mauritius, later ended by an interactive session from YUVANs of Goodlands along with a medicinal and decorative plants distribution.

To combat climate change it is important that we take consciousness of the facts that we are now entering the sixth mass extinction and we have, before us, the most serious challenge in the name of climate change. This project has been initiated because climate change is not a myth. We need to assume our responsibility because the future of the world depends on us. After reports from the United Nations Intergovernmental Panel on Climate Change and the Potsdam Institute for Climate Impact Research in Germany, it has been established that humans are the main cause of global warming. We are now experiencing man-made climate change because of human activities and because of our interference with the Earth’s system. It is a fact that the majority of people are still unaware of how their daily activities are causing climate change. This project may be a pioneer in bringing forth the hidden pain and the unheard cries of Mother Earth.

We cannot deny that several human activities are causing the Earth to heat up, to be wounded, to cough and to melt. Firstly, our oceans are being depleted and we are filling them with untold amounts of trash, chemicals and plastic. Plastic takes years to biodegrade and kills many marine animals.

The second main issue is the everyday destruction of rainforests. The lungs of the planet, the Amazon rainforests, are being cleared at an unprecedented rate, and today, more than 91% has already been destroyed. If we do not act, the last place on Earth where orangutans, rhinos, tigers, elephants and sunbears live together, faces the real risk of disappearing before our very eyes. The damage we’re causing to the Earth cannot even be quantified. Our climate crisis is now a global challenge and there is no turning back. The leading cause of climate change is a hard-hitting fact. Animal agriculture, which exists because of meat consumption, is a large emitter of methane, which has a global warming power of 86 times than that of CO2 and is 25 to 100 times more destructive than CO2.

Let’s get real. For years now, environmental organizations and governmental officials have encouraged society to carpool, ride bikes, conserve electricity, compost, recycle, but it is clearly not enough. This initiative may be a milestone in reversing climate change, and may be one of the most vital steps taken for a better world.

This seminar aimed in the end, that every individual attending takes as their mission the following:

Our Mother needs us! Take urgent action to combat climate change and its impacts.

“When it comes to climate change, it is clearly a point of no return. It needs to be tackled as efficiently and effectively as possible because we are not just fighting the impacts of climate change – we need to stop and reverse climate change.” – Oorvashi Panchoo, Project Leader