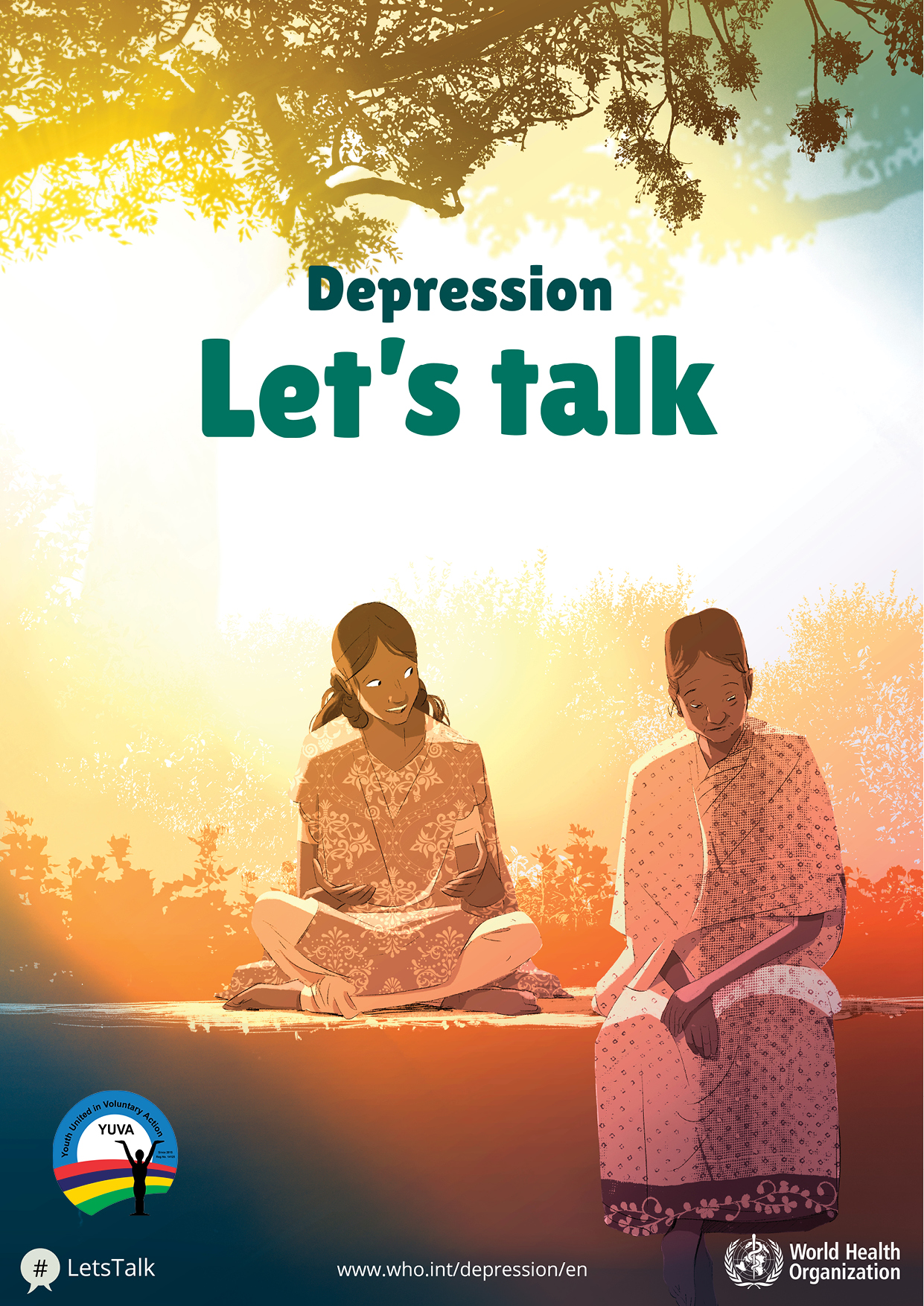 WHO is leading a global campaign on depression for World Health Day 2017, celebrated today. Its goal is to enable more people with mental disorders to live healthy, productive lives.

Depression is a common illness worldwide, with more than 300 million people affected. Depression is different from usual mood fluctuations and short-lived emotional responses to challenges in everyday life. Especially when long-lasting and with moderate or severe intensity, depression may become a serious health condition. It can cause the affected person to suffer greatly and function poorly at work, at school and in the family. At its worst, depression can lead to suicide. Close to 800 000 people die due to suicide every year. Suicide is the second leading cause of death in 15-29-year-olds.

Although there are known, effective treatments for depression, fewer than half of those affected in the world (in many countries, fewer than 10%) receive such treatments. Barriers to effective care include a lack of resources, lack of trained health-care providers, and social stigma associated with mental disorders. Another barrier to effective care is inaccurate assessment. In countries of all income levels, people who are depressed are often not correctly diagnosed, and others who do not have the disorder are too often misdiagnosed and prescribed antidepressants.

The burden of depression and other mental health conditions is on the rise globally. A World Health Assembly resolution passed in May 2013 has called for a comprehensive, coordinated response to mental disorders at country level.

Depending on the number and severity of symptoms, a depressive episode can be categorized as mild, moderate, or severe.

A key distinction is also made between depression in people who have or do not have a history of manic episodes. Both types of depression can be chronic (i.e. over an extended period of time) with relapses, especially if they go untreated.

Depending on the number and severity of symptoms, a depressive episode can be categorized as mild, moderate, or severe. An individual with a mild depressive episode will have some difficulty in continuing with ordinary work and social activities, but will probably not cease to function completely. During a severe depressive episode, it is very unlikely that the sufferer will be able to continue with social, work, or domestic activities, except to a very limited extent.

Depression results from a complex interaction of social, psychological and biological factors. People who have gone through adverse life events (unemployment, bereavement, psychological trauma) are more likely to develop depression. Depression can, in turn, lead to more stress and dysfunction and worsen the affected person’s life situation and depression itself.

Prevention programmes have been shown to reduce depression. Effective community approaches to prevent depression include school-based programmes to enhance a pattern of positive thinking in children and adolescents. Interventions for parents of children with behavioural problems may reduce parental depressive symptoms and improve outcomes for their children. Exercise programmes for the elderly can also be effective in depression prevention.

There are effective treatments for moderate and severe depression. Health-care providers may offer psychological treatments (such as behavioural activation, cognitive behavioural therapy [CBT], and interpersonal psychotherapy [IPT]) or antidepressant medication (such as selective serotonin reuptake inhibitors [SSRIs] and tricyclic antidepressants [TCAs]). Health-care providers should keep in mind the possible adverse effects associated with antidepressant medication, the ability to deliver either intervention (in terms of expertise, and/or treatment availability), and individual preferences. Different psychological treatment formats for consideration include individual and/or group face-to-face psychological treatments delivered by professionals and supervised lay therapists.

Depression is one of the priority conditions covered by WHO’s Mental Health Gap Action Programme (mhGAP). The Programme aims to help countries increase services for people with mental, neurological and substance use disorders, through care provided by health workers who are not specialists in mental health. The Programme asserts that with proper care, psychosocial assistance and medication, tens of millions of people with mental disorders, including depression, could begin to lead normal lives – even where resources are scarce.

These short videos have been produced as part of WHO’s “Depression: let’s talk” campaign. They highlight some of the symptoms of depression following childbirth and the importance of talking as the first step towards getting help.

Let’s talk about depression – focus on adolescents and young adults

Let’s talk about depression – focus on women with young babies