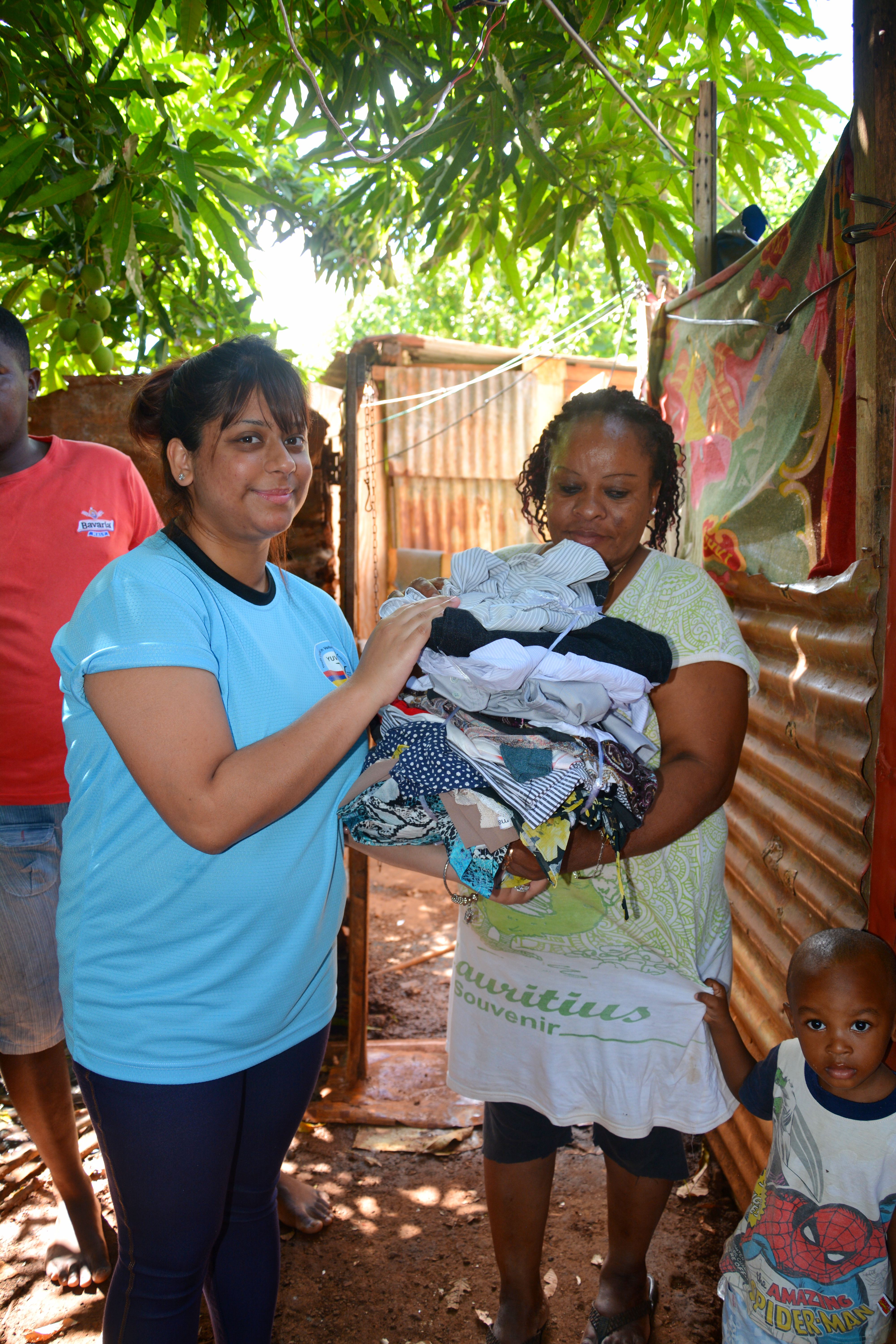 Being a member at YUVA is the greatest discovery of knowing the capacity of my youth. Mr. Krishna Athal and Mr. Jovani Rose are one of the best mentors and inspirators who make me realise about my capability and skills which I possess in myself.

On Sunday 10 December 2017, I had a heart-breaking experience at Baie du Tombeau (Longère Tole) which was proceeded with a donation of clothes to 68 vulnerable families by YUVA. For me, I always refer Poverty in the example of the film ‘Slumdog Millionaire. I knew that Mauritius has Poor people, but today I saw the reality in front of me which was unbelievable.

We (YUVANs) together with Mrs. Veronique – the person in charges for searching this region, went for a door to door visit to distribute the clothes among the families. I was very shocked to see the habitants condition of living there. All the houses went made with rusted roofing sheet, which anytime can collapse. The floor was natural soil pavement, which I could imagine when there is heavy rainfall how is cause mud difficulty and it was covered together with broken concrete and pieces of glass which can hurt anyone. The environment was dirty and lack of hygiene, dust everywhere, litter and dog/cat poop which gave a very bad smell. The children were running and playing without any protection, they picked up things anywhere and their hand got a direct contact with their mouth and eyes. I could saw a mother who was feeding her baby in the dusty area. All the houses were built very close to each other where there is no sign of any fresh air. While distributing the clothes I got the opportunity to peek inside the house which consists of tiny rooms where I could not differentiate between the kitchen and bedroom. Mrs. Veronique even declared that most of the habitants used the open area as toilets. And I felt so downhearted, when I saw everyone step out their house and stare at us while we were walking and proceeding with the donation as if we were Stars who came to visit them. The way everyone kept on saying ‘Bonjour’ Hello and kept on thanking us as soon as we gave them the clothes. And for them, they already got used to this condition of living as if it was normal.

My opinion is the government could work on a project for ameliorating the condition of living there, build new houses like the NHDC ones and without any form of value judgement the habitant could start thinking about taking some responsibility like searching for a job or try to empower themselves as there are so many facilities/services provided by the government and other firms as the majority people I met there was the Youngs between 19 – 36 years old. I think they should motivate themselves in willing to exploit them in these opportunities so as they can come out of the poverty line. The effort starts by them also.

My conclusion is when I realised the way some people live with their daily condition of living, I must say that I am a Princess since I have been born and till now I thank God deeply for giving me everything on a golden plate and seeing all this it true when elders say love what you are and for what you have never been greedy or waste money, food and clothing. But many thanks to YUVA – Mr. Krishna and Mr. Rose for making me a real Social worker and access with the volunteer work and now I become fully aware that service to others is the rent you pay for a room here on earth and together everyone can make a world of difference.