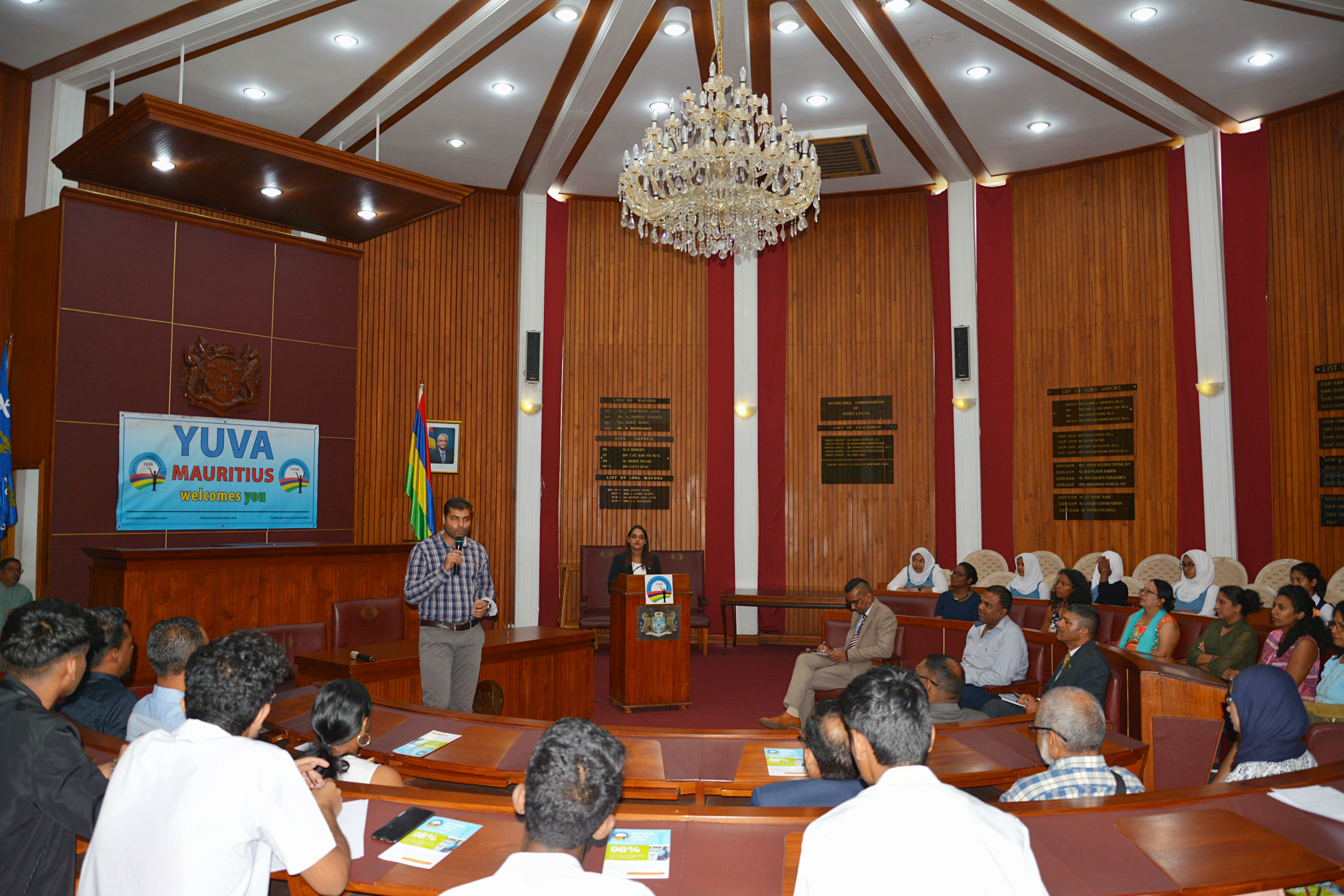 The National Day 2019 Student Speech was organised by YUVA on Friday, 8 March 2019 at the Council Chamber of the Municipality of Port Louis, on the occasion of the 51st Independence Day and 27th Republic Day of Mauritius.

The event started with a rendition of the National Anthem, evoking patriotic sentiments within each attendee. Attendees consisted of members of the Ministries, Presidents and Directors of organisations, Rectors, educators and secondary school and university students. Following the welcome address, the event proceeded with a brief account of the National day.

The aim of the event was to provide the younger generation of Mauritius with a platform to make their voices heard, since they also form part of the stakeholders in the development of the country.

The event proceeded with an ice-breaking activity followed by a second one whereby groups of five were formed. Each group gave a name to their group and made a poster presentation on National Day 2019.

Les 5 Fantastiques focused on ‘Moris de Demain 2019’. They accentuated the different areas of improvement in the fields of politics, social, education, philosophy, environment and economy of Mauritius.

The Unity group highlighted the major social problems being caused due to drug use and trafficking, especially synthetic drugs, as well as high cigarette consumption among the young people of Mauritius.

Les Independents detailed the positive development that occurred in Mauritius since its independence including the emancipation of women, the diversification of the economy and the people of Chagos winning back their lands from the British.

The group Freedom also talked about the achievements of Mauritius since its independence, such as freedom of expression and gender equality. However, they emphasised that the lack of patriotism and moral values in the education system of Mauritius is causing the citizens to become selfish and individualised.

The He for She group talked about their vision for the National Day 2019. They wish for a grand celebration for the people of Chagos on winning back their land and made an open call to all Mauritians, to come back their motherland and celebrate the 51st Independence of Mauritius together.

The Rainbow group invited the audience to be grateful for the peace and harmony that prevails in the country, including all the positive things that Mauritius has to offer, such as multilingualism, no extreme poverty, gender equality and promotion of love and respect for each other.

The Power group stated that ‘Together we are powerful’. They placed emphasis on the need to work together to achieve success. They also stated that by adopting a collaborative approach and transcending the barriers that exist between us, we can bring Mauritius to the heights of success and development.

The Prosper group talked about how Mauritius is being considered as a developed country in many aspects. They made reference to the beauty of Mauritius in terms of the diversity of cultures, the prevailing peace and tolerance and the fact that we are different people living as one nation, loving and respecting each other.

This activity portrayed the beauty of Mauritius whereby members put aside their differences and came together for a common purpose. The outcome was a beautiful blend of ideas and views, depicting the concept of ‘unity in diversity’.

Renee Adriano from Bhujoharry College La Tour Koenig, delivered a moving poem about a mother, paying due respects to Women’s day. He recounted the sacrifices a mother has to make, since putting a child on earth and raising them.

Helvin Arnachellum from Royal College Curepipe brought the audience back in history, recounting how the different events of the past, from the Dutch’s landing on the island to independence, eventually led to us to being here today, as independent people, making use of our freedom of expression.

Asmah Goolamallee from Pailles SSS envisioned Mauritius as an epitome of harmony. Through the struggles and sacrifices of our ancestors, today we are able to live harmoniously. She concluded with a quote from Mark Twain ‘Mauritius was made first and then heaven. Heaven was copied from Mauritius.’

Medhini Kusnumah from Bhujoharry Quartier Militaire College indicated that education is the backbone of our economic development. She also highlighted the development of Mauritius since independence, such as the fast growth of GDP, the diversification of the economy, innovation through technology and the advances in medical care.

The panellists then proceeded to comment on the speeches.

Mr Ashwin Banerjee, Manager of Kinouete Association, touched on the importance of the mother and the need to make the rainbow nation a reality. He addressed the youth and reminded them of their potential to succeed by being the light for themselves, for the society and for the nation.

Mr Mevin Munisamy, President of Light of Hope, reminded the young people that they are the future and that they have the potential and quality to bring about a better Mauritius. He also noted that the youth can learn from their elders but the elders also have much to gain from the younger generations.

Mr Rakesh Ramphul, Acting Rector of Mahatma Gandhi Secondary School Solferino, encouraged everyone to read on the history of Mauritius in order to become aware of the treasure of the country. He also pointed out the importance of values and remarked that values cut across differences. He concluded with the importance of education for development and success.

Mr Kris Padayachy, Director of Alphalec, highlighted the importance of education through his personal life story. He encouraged the students and youth to consider him and the other elders in the room as mentors and to come to them regarding any help they may require to contribute to the development of Mauritius.

The programme ended with a short address from Mr Krishna Athal, Executive Director of YUVA, who highlighted how collaborative initiatives, such as this event, can lead to development and progress.

Krishna Athal, YUVA Executive Director was interviewed by ION News for the ‘Dialogue on National Day 2019’ at the Council Chamber of Port Louis: